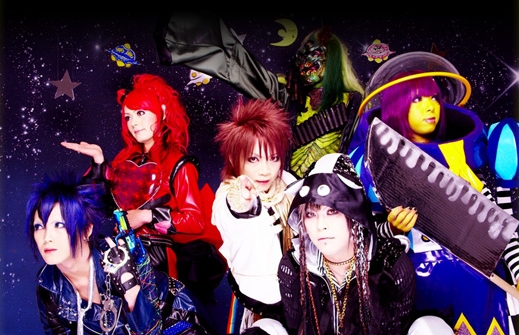 At AnimeNEXT 2011 a crowd of excited and curious fans eagerly awaited an exciting show. As the lights dimmed, a voice suddenly filled the room, telling the crowd that they were no longer at the Convention Center in Somerset NJ, but in Mix Land, Japan, awaiting to see marvelous different displays and creatures.

Slowly, the disembodied voice announced the bands members as animals: S, as a zombie sheep, Seek as a zombie condor, Keiji as a zombie lion, Aya as a zombie rabbit, Miki as a zombie cat and finally Yuki as a zombie dog. As they are announced, each member came out dressed in their corresponding outfit, dramatically presenting themselves to the crowd while taking their places. The music started and sure enough, the crowd was whisked off into a whole other world.

With light-up wands in hand, Mix Speakers Inc (MSI for short) quickly dove into their performance, dancing and exciting the crowd. With enthusiasm, the band picked up their instruments and jumped right into the first song. Seemingly without realizing it, the crowd suddenly began dancing along. The song changed from “Cinderella” to “JUNK STORY,” but the excitement was so overwhelming that one would have needed to take a moment to realize that the song had changed. With another smooth transition, “Pandora” began. All the while, the crowd’s eyes could not be drawn away from the stage. The members took on the life of their characters: Seek, raised his arms so that his costume, zombie condor, resembled tattered wings, jumped up onto the steel box at the front of the stage. Simultaneously, the vocalists, Miki and Yuki, danced and sang on either side of the box.

The song changed again and the crowd still danced while the band on stage delved into a round of Para para-like dances. The song faded. It was time for an MC. Yuki, smiling, introduced each member of the band, who each enthusiastically smiled or waved to the crowd while the audience cheered. The music resumed and everyone was once again tossed back into the energetic music with “Yuuwakusei Rhythm.” Then it was time for “Romeo no Melody.” People all around began to dance and jump at once, smiles plastered on their faces and hands in the air.

Next, it was Yuki’s turn to MC. He invited each member to speak some English. With “Are you Happy?” and one playful refusal to speak English (which was met by laughs from the crowd), the MC finished and the band picked up their wands again. MSI launched into a string of songs starting with “MY CIRCUS.” Somewhere during the journey into Mix Land, the band vanished off stage and that strange voice once again filled the room. It announced that the crowd was about to visit yet another “exhibit in the theme park.” The band reappeared and the music started up again — a lively performance right to the very end with Aoi Monster.

The crowd cheered as they took a bow and exited the stage. It took only a moment until the cheers of “Encore” stared filling the room. Before long, the members of the band returned to the stage, smiling and waving. They resumed their positions and picked up the beat once again. They thrust the crowd into “MONSTIME” followed by “HAPPyyy!! LAND” before leaving the stage for the final time. The crowd cheered for a few minutes before trickling out of the room and back to their hotel rooms and homes for the night.

Mix Speakers Inc, known for not only its dramatic costumes, but its dramatic story lines that accompany each incarnation, truly brought the crowd into this whole new world. The band was a breath of fresh air into the Visual Kei scene with Yuki and Miki’s Oshare kei-like style and performances that contrast Seek’s almost Eroguru Kei style and performance. This band truly knew no bounds. Perhaps next time you too will make the journey into Mix Land or whichever other world MSI brings to life with their lively performance.