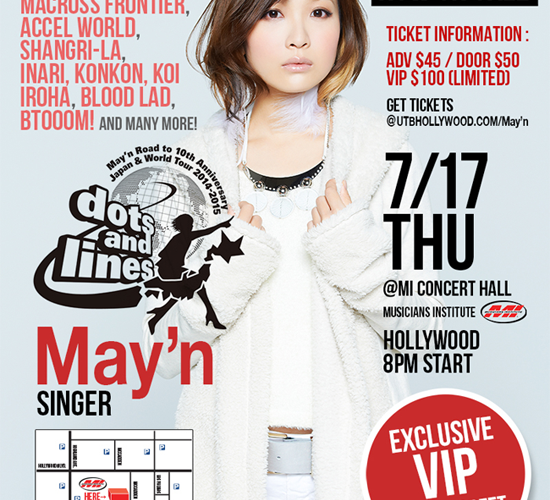 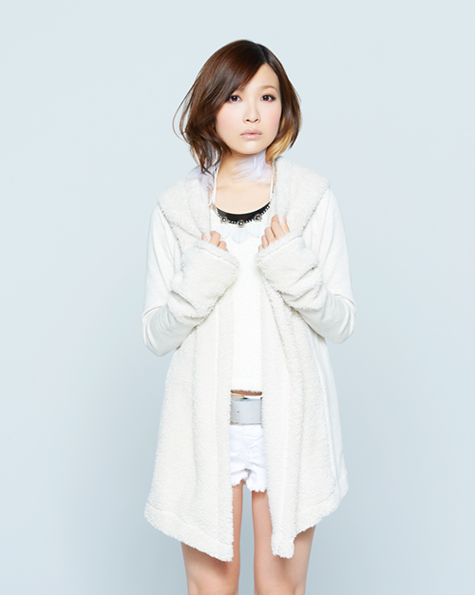 April 18, 2014 – J-Pop and anime singer May’n returns to L.A. for a special performance at the Musicians Institute (www.mi.edu) in Hollywood, CA, on July 17, 2014. The popular Japanese singer is famous worldwide for her music for numerous films, television series, and anime programs. The concert event is the first American stop in her 10th Anniversary “dots and lines” World Tour which began in February this year.

Known for her work as Sheryl Nome (singing voice) in Macross Frontier and several anime themes such as Accel World, Aria The Scarlet Ammo, Inari, Konkon, Koi Iroha, Blood Lad, and Shangri-La, May’n last visited Hollywood in 2012 for her “ROCK YOUR BEATS” World Tour. Her latest album NEW WORLD was released in January in three separate editions, including music videos and a live concert recording.

May’n’s live concert at the MI Concert Hall will offer fans a spectacular live show by one of Japan’s most dynamic singers whose performances have sold out Nippon Budokan multiple times. A limited amount of VIP “meet-and-greet” tickets are available for fans to gain a once-in-a-lifetime chance to meet the singer in person after the show.

The artist name “May’n” is derived from her real name, and it demonstrates her hope to “always sing songs that will be everyone’s main theme.” May’n was discovered in Horipro’s annual Talent Scout Caravan competition at the age of 13, and in 2008, she performed as the singing voice of Diva of the Galaxy, Sheryl Nome, in the TV anime Macross Frontier.

May’n released 2 singles in 2008 which instantly became big hits, each placing in the Top 3 on the Oricon Weekly Chart in their debut week. In January 2009, the long-awaited mini-album May’n☆Street was released, and it achieved 2nd place on the Oricon Weekly Chart in the first week. All of May’n’s releases since then have consistently entered the top music sales charts.

In January 2010, May’n performed her first solo Budokan concert, which sold out in only 1 day. In March of the same year, she held her first tour of Asia, followed in July by a 17-city summer tour of Japan. She works passionately on her live shows in Japan and overseas to deliver her songs directly, fascinating audiences with her irresistible singing skills and unique voice.

In Fall 2010, May’n was chosen to record the theme song for the film Incite Mill -7 Day Death Game-. In February 2011, she released her 3D Live Documentary movie May’n THE MOVIE -Phonic Nation- and later that month released her 2nd album If you… which reached number 7 on the Oricon Weekly Chart. In March 2011, she held her 2nd solo Budokan concert “RHYTHM TANK!!” for a sold-out audience.

After a successful 6-city tour of Asia in May 2011, she participated in the largest-in-Europe Japanese Culture and Entertainment Festival “Japan Expo 2011″ and received large applause. May’n’s latest release HEAT (2012) reached Oricon’s Top 10 in its first week of release. She continues to be the must-see “New Generation Female Rock Vocalist.”

In July, 2010, May’n made her American live performance debut at Anime Expo in Los Angeles. May’n returned to America in 2012 in her “ROCK YOUR BEATS” world tour for special performances in Los Angeles and San Francisco.

May’n released the single “Kyou ni Koiiro” in January 2014 as the opening theme for the Japanese television anime Inari, Konkon, Koi Iroha. In conjunction with the single, May’n also released her fourth album NEW WORLD in three separate editions, in celebration of her tenth year as a professional singer. May’n launched the first part of her “May’n Road to 10th Anniversary –  dots and lines Japan & World Tour 2014-2015,” in February 2014. 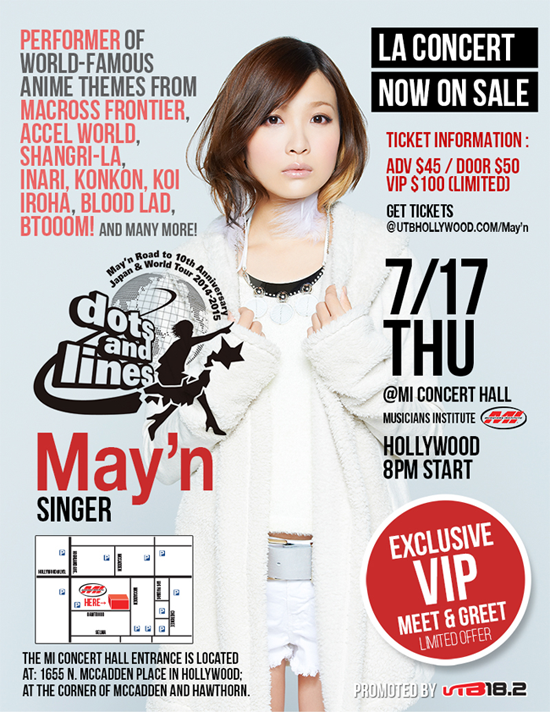