Live Report: the GazettE in NYC 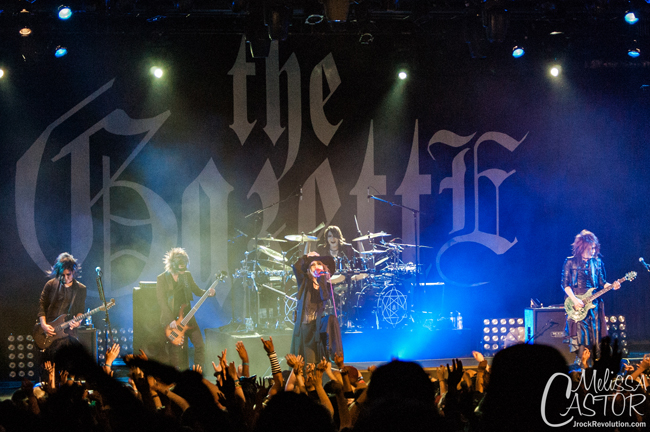 The GazettE performing in New York City is a show that some people have been waiting more then a decade to see. On Friday, April 29, 2015, the dream became a reality. The GazettE had a tour in North America for the first time in their career. NYC was the 3rd stop on the World Tour Dogmatic Trois, performing in Toronto, Canada and Dallas, Texas before coming to New York.

Fans were eager to line up as early as possible to secure a good spot, to the point that the venue had to put up signs asking people to not line up before 8am the day of the show and even had a police officer in the covered hallway next to the venue to prevent anyone from waiting in line. Nonetheless, fans lined up as early as they were allowed – nobody wanted to miss a chance at front row. From VIP lines to General Admissions lines, both lines lengthened throughout the day.

Finally the time was upon us to go inside and experience the GazettE. Anticipation was high and everyone was eager. Most people never thought the GazettE would come to North America, so you can bet every single person in attendance was glad the band finally did come to our country. Some people traveled far while others were locals, but no matter where you came from, everyone could agree of their love for this band.

There was a brief announcement reminding attendees there was no photography or video allowed for this evening’s performance. Shortly after 8pm, the house lights dimmed and scream erupted as the intro music, Nihil, began. Fog filled the stage as one by one, the members came out under dim lighting. As the intro ended, the lights turned up and everyone got their first look of the GazettE in the flesh and the show was off and running.

The energy in the building was high and the temperature was hot. Hair could be seen whipping through the air as people started headbanging to the music. Arms were thrown up, moving to the beat, devoid of cameras and simply living in the moment.

Ruki danced sensually up on the riser in the center of the stage, touching his chest as he swayed his body back and forth and sang. His body was moving like a wave, this way and that. Meanwhile, Kai’s drum kit was up on a riser so it was easy to see him and he didn’t get lost behind those in front. Aoi and Uruha played their guitars like their life depended on it, putting their all into every note.

“Lets jump New York!” Ruki said as they went into Vortex. He said New York often throughout the night, causing cheers every time he said it. Everyone screamed the English chorus verse of this song, “I don’t want to become the f*cking garbage like you!” Even just three songs in, Ruki was constantly getting the crowd to cheer and jump. They didn’t need any encouragement as everyone was going wild.

The lighting matched each song and was constantly changing. At one point, the lights flashed on and off rapidly creating a silhouette on all the members, which was very eerie but beautiful.

Throughout the live, everyone had their arms in the air and no cameras. It was just like a Japanese live – in Japan, cameras are not allowed at lives and nobody would even think of taking one out. It is simply an established and respected rule.

For Uruha’s guitar solo, he moved close to the edge of the stage and everyone gave him their full attention. He soaked up the attention and he showed his impressive skills on the guitar.

Kai could be seen grinning almost the entire time, like he was having the time of his life on the drums, seeing everything from a higher vantage point.

Reita would squat down so he was almost doing a split while impressively still playing his bass. He would often stick his tongue out as a tease.

During Ominous, Ruki sat down on the stage; this song was slower then the previous ones. He looked like a fallen angel. He was holding a glowing lantern; it was the brightest thing on the stage at this point. He slowly waved his fingers around it, almost like a ballerina would move slowly with poise and grace; it was gorgeous. As the song surged, he dropped to his knees and dashed the lantern onto the stage. The audience all had their arms stretched out to Ruki, like he was a god.

“Hello New York! Come on, come on, come on!” Suicide Circus started and during the chorus, Ruki shouted, “Sing it!” and the crowd sang back the part that said the songs title. “Suicide Circus!” everyone shouted together. “Come on, jump jump!” Ruki shouted in between lyrics. Aoi and Reita were headbanging hard to this song.

“You guys are awesome! You guys are crazy!” Ruki’s MC’s were in English the entire night. “Whats up people? In the back! Back! Front! Front! Side! Side!” Each direction was punctuated with a beat of the drum. Ruki wanted all the sections of the venue to scream to see who would be the loudest. (It was hard to say – everyone was really loud!) “Are you ready?!”

The crowd on the floor got so hot, the security guards started spraying cool water from water bottles on people to keep everyone cool. That’s how you know it’s a hot live!

Music is their life and it shows in every thing these 5 men do on stage. Aoi and Uruha played guitars facing each other during Derangement, both fully concentrating on their instruments.

Anytime a member would go to the edge of the stage, it would be just beyond the grasp of the audience. They were just out of reach, so close and yet so far. As if reaching one more inch and you’d be able to touch them, but then they would pull back to the stage once again. Ruki, Aoi, Uruha and Reita all took their turns doing this and teasing the crowd. As the live went on, it seemed the members were enjoying themselves more and more, smiling and showing off.

Undying is their newest single, released just 2 days before this concert. However, it seemed the audience knew this song and enjoyed it to its fullest! It’s a hard song to describe, as it has hardcore headbanging moments but then ends with a piano, almost ballad sounding moment. “Thank you so much, New York!” Ruki said as the piano ending of the song played, before one more growling note.

“Last song!” Ruki shouted. The last song of the night was a GazettE classic: Filth in the Beauty. It’s a fan favorite from 2007. For the first verse, Ruki held out the microphone to the audience and let them sing – despite it being in Japanese, most of the audience could easily sing along. Ruki was smiling; impressed this America audience would know their Japanese lyrics. “Let’s go!” he shouted before the audience sang, “My mind which falls” prior to the chorus.

As the audience sang the English chorus, Ruki licked his microphone, lending to the sexual nature of this song. Aoi, Uruha and Reita all headbanged exactly as they did in the PV for Filth in the Beauty. (Ruki was wearing a hat which would’ve fallen off if he headbanged too hard.) The audience sang about half the song with Ruki singing the other half. It was impressive to say the least. Ruki would nod in approval and perhaps even pride as the audience knew the bands songs so well. “You guys are f*cking crazy! Thank you!” Ruki said at the end.

Encore chants started immediately as the band left the stage, but they wanted to keep everyone in suspense. About 10 minutes later, they returned to the stage, all wearing tour t-shirts! “Thank you New York!” followed by a lot of screaming. Ruki also carried with him an America flag created by fans for this NYC show, which read “the GazettE” and had signatures and thank you notes for the band written on it from everyone who had waited in line during the day.

The first encore song was also an older song from 2007, Agony. It’s a rap song mostly in English and again, the audience showed their GazettE knowledge by expertly singing along.

“Lets jump!” Ruki screamed as he jumped and encouraged the audience to jump too as Cockroach started – this was the oldest song they played, dating from 2005. “You ready?! 3, 2, 1!”

As the song faded out, Ruki ended with, “Thank you! See you again, New York! Bye bye~ I love you. Thank you so much.” Aoi, Uruha and Reita all went to the edge of the stage and threw their picks to the crowd. Then all 5 members gathered in the center of the stage and held hands as they took a bow together.

Before leaving the stage, Ruki took a photo of the crowd on his phone. He had to try a few times to get the correct angle and at one point, Kai, who was still throwing his drumsticks, almost hit Ruki with a drumstick! Ruki was taking a long time with his photo of the crowd and Kai was not expecting him there and they almost collided. Aoi was also taking a selfie with the crowd, which can be seen on his instagram. Likewise, Ruki’s photo is on his personal instagram.

Following the performance, those with VIP tickets were able to do a meet & greet handshake with the band.

Thank you the GazettE for coming to New York City and we hope to see you again! 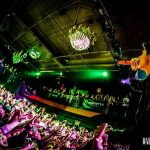 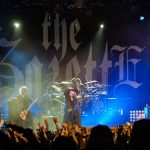 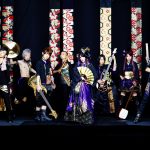 Thank you PS Company for the opportunity to photograph this show.