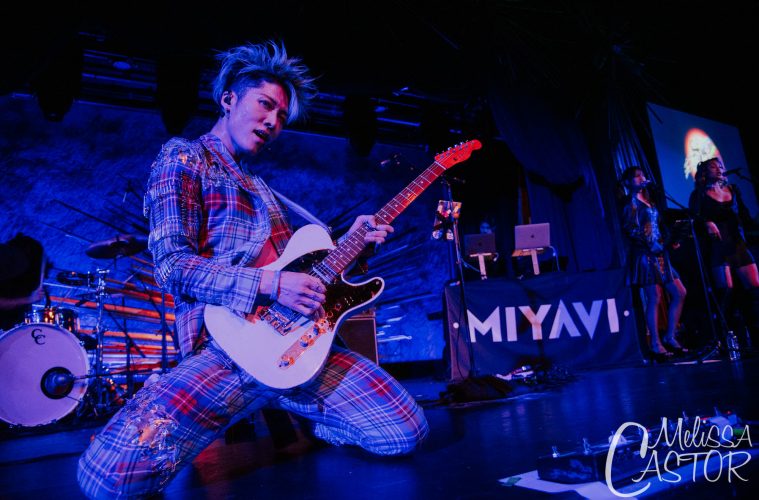 It’s been two years and a still on-going global pandemic since MIYAVI was last in New York City, but on Wednesday, October 27, 2021, MIYAVI returned to the stage at Sony Hall once again to a packed venue. This was many attendees’ first concert back since the pandemic began in early 2020 – and what a welcome return to live music.

MIYAVI looked like someone straight out of an anime with his bright blue/red tartan suit, no shirt, and bright blue/green hair. He walked out onto the stage with his backup band to a room of cheering, yelling, and mask-covered faces. Things may look a little different since the last time MIYAVI was on this stage in 2019, but the energy was more intense than any previous show.

After the ‘Holy Nights’ Introduction music played, he jumped straight into the high energy song ‘Need for Speed.’ The crowd instantly threw themselves into the music as Miyavi wasted no time in moving back and forth across the stage, never staying in one spot for too long.

He promptly launched into an MC after that – “We made it! We made it! We’re back in New York City!” MIYAVI spoke of how the Imaginary Tour 2021 went to many new cities across North America – both in the USA and Canada – places he had never visited before but was welcomed with open arms. His MC’s on this tour were very in depth compared to previous tours – but as MIYAVI mentioned – he missed the touring life a lot and there was a lot to talk about. “The virus is invisible, that’s why we’re scared. But at the same time, music is invisible as well.” – but music is powerful.

MIYAVI is a presence to watch on stage. His energy is contagious and when he wants you to wave your arms or jump, you feel drawn to do just that and contribute to the energy of the room. The crowd this night was an incredibly diverse crowd of all ages, genders, and races. MIYAVI’s music has no bounds and transcends all stereotypes. Anyone and everyone can like MIYAVI’s music.

For his next MC, MIYAVI asked the crowd, “Are you having fun? I’m not the only one sweating here, right?” he said, as he was dripping in sweat. The crowd cheered as it was hot in there! He spoke of how he’s in New York City a lot for video shoots, photo shoots, movies and press work. “We came here to have a good time and feel the power of music!”

Of course, he couldn’t do this show alone. He toured with a wonderful back up band including: Anthony on drums, Jonny on DJ, and backing vocals of the lovely ladies Gaby and Dolly. Towards the end of ‘Perfect Storm,’ Gaby came forward and sang a solo while MIYAVI shredded on the guitar which the audience loved! Gaby has a beautiful voice and she had a moment in the spotlight too.

MIYAVI’s next MC had him letting the audience know about his latest album release a few weeks prior, ‘Imaginary’ which the tour is named after. He spoke of how the music industry is constantly changing. “I never expected to be able to come back to the States this soon.” He spoke of all the work he’s been doing during the pandemic, such as acting in movies including ‘Kate’ on Netflix – which hit #1 on Netflix! MIYAVI was the first rock musician to ever play at Kiyomizu Temple in Kyoto – “Its one of my life’s achievements.” He spoke of being stuck in Japan during the pandemic but didn’t want to complain and tried to make the most of it by keeping busy. He’s currently making a music video for ‘Hush Hush.’ MIYAVI also did some voice acting in both English and Japanese. Following this North American tour, he’ll also be doing a Japan tour shortly! He recently collaborated with PVRIS on a song for the Arcanes League of Legends soundtrack. Additionally, MIYAVI said he’s teaching English to Japanese people. Needless to say – MIYAVI’s kept very busy!

‘Under The Same Sky’ was performed acoustically and sounded beautiful. It gave everyone a moment to catch their breath for this mellow song. But then the beat picked up again with ‘Holy Nights’ as everyone was dancing and clapping along, the bright lighting helping set the tone. Dolly and Gaby sang together in a beautiful harmony. During the ‘la la la’ moments, they waved their arms in the air back and forth and the crowd followed suit.

In his fifth MC of the night, MIYAVI spoke of how scary it is that we cannot see the future, and how we never know what could happen to our jobs, school life, and so on. Imagination is the key to build the future. MIYAVI continues to use his platform to spread positivity and hopefulness for the future. “Let’s play a few songs off the new album.” Following this was the title song from that new album, ‘Imaginary.’

It seems the crowd did their homework and knew all the new songs, including ‘Imaginary,’ ‘New Gravity,’ and ‘Warrior.’ After not having any live music for the past year and a half, its so easy to lose yourself once again in the melody and feelings.

A popular song of the night was MIYAVI’s cover of ‘Smells Like Teen Spirit’ from Nirvana. This performance had a lot of loud cheering and everyone in the room was singing and jumping along to this iconic tune.

‘No Sleep Till Tokyo’ was another upbeat poppin’ song of the night that had everyone ready to go hard! Following that was ‘Day 1,’ during which MIYAVI asked the crowd to get down low and then jump up when he gave the cue. Everyone was laughing as they crouched down and then sprung back up on command. It was an excellent way to end the set.

But as any concert fan knows, that’s rarely the end. As the band walked off stage, chants immediately started of, “MI-YA-VI” and “one more song” – and MIYAVI didn’t take long to oblige. He walked back out on stage in a black tank top and his phone recording video of the cheering crowd and himself. Everyone waved to the recording of this moment in time.

MIYAVI spoke of how we are all sharing this live music together – and its a reunion after too long apart. He once again introduced his band members to the joy of the audience. MIYAVI thanked both the band and the crew for their hard work. During this MC, someone in the crowd shouted, “It’s my birthday!” and MIYAVI heard – and the band sang Happy Birthday to this person (and others whose birthday was also this day) – it was a sweet and unexpected moment and an unforgettable birthday for those people!

There were a few more songs before the night was officially over including a guitar solo of the classic ‘Over The Rainbow’ – MIYAVI adds a whole new layer to a song everyone knows and loves. His guitar work on this song is beyond words and you should hear it for yourself. It’s recorded and available on all music platforms – but hearing it live is out of this world.

MIYAVI closed out the night with ‘The Others’ and one of his most well known songs – ‘What’s My Name.’ As he played the guitar intro, the audience knew what was coming and when he asked, “What’s my name?” the fans knew how to answer – MIYAVI! With this being the last song, the fans gave it their all one last time, going as hard as possible with jumping, headbanging, waving their arms, and cheering.

MIYAVI assured the crowd he would be back soon – and knowing him, he’ll be back before we even know it. As the outro song ‘New Gravity’ came on, the band all came to the front of the stage and took a socially distanced bow together. They then continued to stay up front and dance and sing along to the song, much to the delight of the fans who also continued to sing along. Despite everyone in the crowd wearing masks, you could tell everyone was smiling underneath that mask. MIYAVI walked back as if exiting the stage, before turning around and running to the audience, giving high fives and slapping hands with anyone he could reach, going down the entire barrier to reach as many fans as possible.

It’s a weird time we’re still living through, yet MIYAVI knows how to make you feel welcomed at his concerts and gives you hope for the future. Let’s all hope the future holds another MIYAVI North American tour soon!

Setlist:
Holy Nights (Intro)
Need for Speed
MC
So On It
In Crowd
Bumps in the Night
MC
Tokio
Perfect Storm
MC
Tears on Fire
Other Side
MC
Under The Same Sky
Holy Nights
MC
Imaginary
New Gravity
Warrior
Smells Like Teen Spirit
Fire Bird
Raise me Up
No Sleep Till Tokyo
Day 1

Encore:
MC + Member Introductions
Dance With Me
Over The Rainbow
The Others
What’s My Name 2017