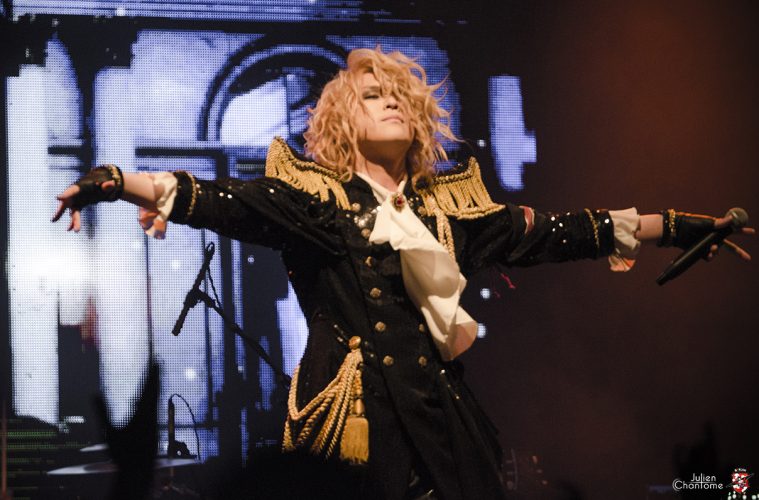 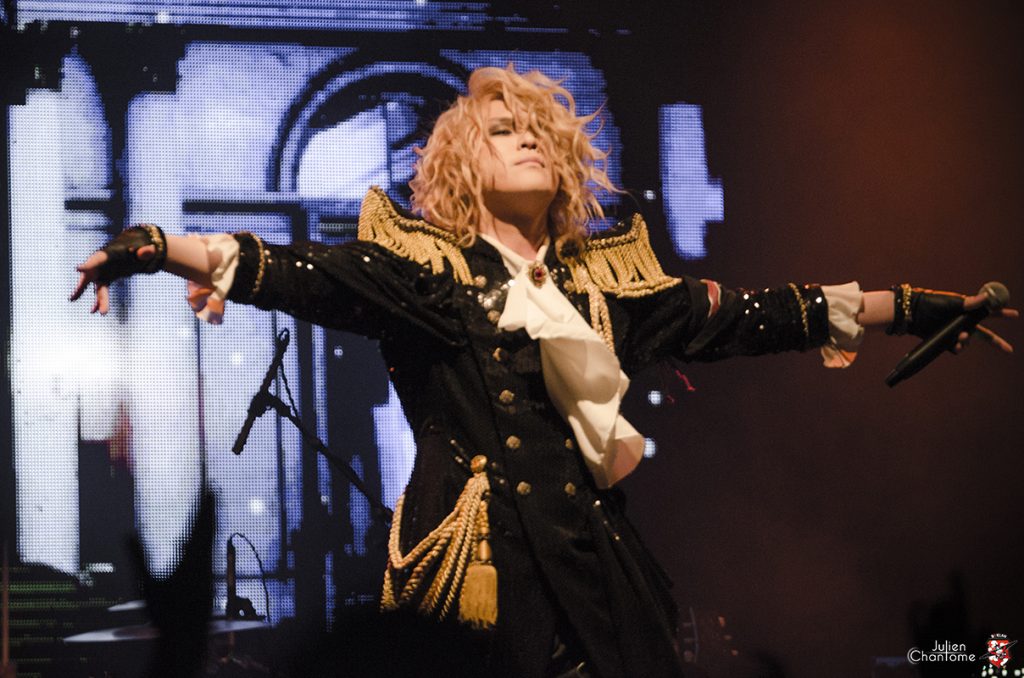 Kamijo’s 20th World Tour Anniversary concert in New York City on June 6, 2015 brought out the elegance of NYC. May whom attended the concert dressed elegantly in Lolita or aristocratic style to match Kamijo’s typical attire. Those who had bought VIP tickets entered the venue early for a meet & greet and cheki (polaroid) photo with him.

Despite the long 1.5 hour wait between doors opening for general admission and the concert beginning, nobody was disappointed as at 8pm on the dot the lights dimmed and the introduction music began playing. Out walked Kamijo’s support band followed by the man himself, wearing a sequenced black outfit. Words cannot do justice to Kamijo or his bands attire and the elegance they emanate while still rocking out.

Kamijo had not performed in New York City since Versailles performance back in 2008. A majority of Kamijo fans know him from Versailles days, so it felt fitting for the evening to start with a fan favorite of Versailles, “Masquerade”. Right from the get go, everyone was into it with their arms in the air following the beat and throwing up devil horns.
After the first song, Kamijo greeted the audience to screams and cheers, “Bonjour~ Bonjour! Long time no see, New York. Welcome to my Paris.”

The second song was another Versailles song, “Shout & Bite.” During the chorus of this song, Kamijo and his band would spin around in unison, their coats flaring out around them giving a beautifully visual effect.

As songs would finish, Kamijo would raise one hand to ear and gesture with his other hand for the audience to continue cheering louder and louder, asking for more. He wanted to know we wanted more. He would often come close to the edge of the stage, standing directly in front of the audience. The stage had no barrier, so fans pressed as close as possible to the vocalist.
One moment when he was at the end of the stage, staring out into the crowd, a girl held up a bouquiet of roses, which he accepted. He smelled the blue roses then held them close to his chest as he continued singing. He smelled them one more time before handing them over to a staff member at the back of the stage.

Kamijo was sure to indulge the audience in small acts of fanservice, by slinging his arm around one of his bandmates and putting the microphone to their mouths, asking them to help in sing the song. The audience appreciated these acts of affection.

Towards the middle of the evening, Kamijo left the stage and his band played, each having a solo moment to show off his skills. Kamijo’s support band for this show was as follows:

After their song was over, the members left the stage and Kamijo returned alone to perform a beautiful slow song of his more recent solo work, Presto.

The evening consisted of a grand selection of Kamijo’s work over the past 20 years, including a few LAREINE songs, some Versailles, and even a NEW SODMY song in addition to his current solo music.

As Kamijo finished the last song and he and the band left the stage, the audience immediately began screaming a chant of “Encore! Encore!” hoping for his return. Just moments later, they all did indeed return. Kamijo waved his arms, asking for more applauses and screams. Asking the audience to follow his lead, he sang, “Woah woah woahhh” and the audience would repeat it back to him, all voices mixing to become one.

Kamijo shouted, “Last song! Last song!” to groans of disappointment from the audience, but the last song was arguable Kamijo’s most well known: Versailles song Aristocrat’s Symphony. This song had the loudest reaction of the night, with many singing along.

The musical performance may have been finished, but Kamijo wasn’t done yet! He introduced each member of his support band and said to them, “Thank you. Arigatou” before they hugged. “This is Shin.” “This is Meku.” “This is Daishi.” “This is Masashi.” Each introduction came with cheers. Last but not least, Kamijo pointed to himself and the audience shouted his name.
Kamijo brought out an American flag that fans had created with his Vive le Roi design logo on it and they had all signed, given as a present. He held it up proudly and gratefully.

All band members then held hands and on the count of three, they would jump for a show well done! Kamijo asked the audience to join in their celebration and audience members held hands with their neighbors and jumped together with the band on the count of three. There were smiles on everyone’s faces. Kamijo then put the flag on top of his head, covering his head and face as the other members throw out their guitar/bass picks and drumsticks to the crowd, taking a bow before leaving the stage one last time. 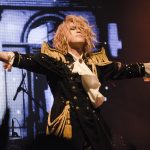 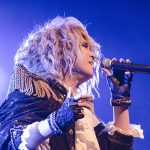 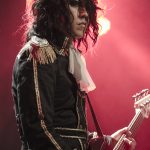 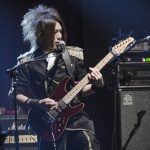 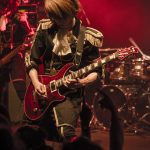 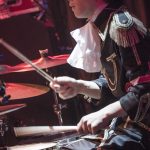