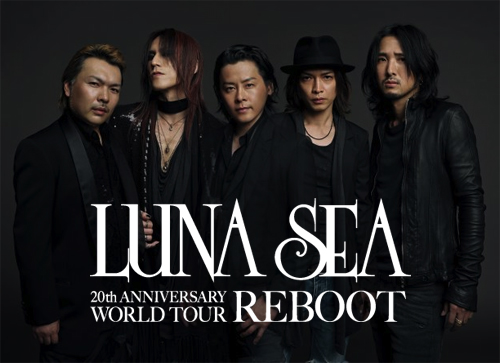 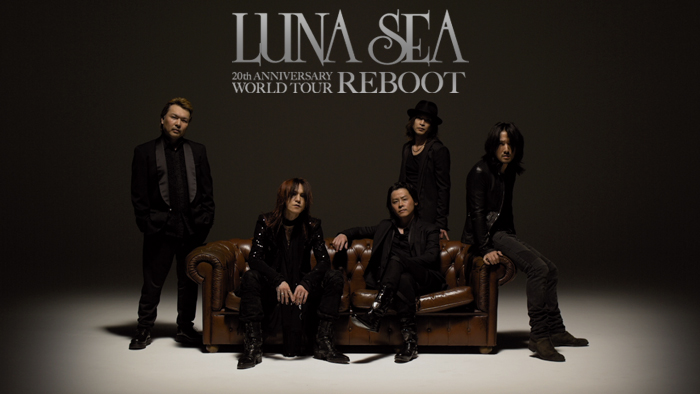 Just before the show at the Palladium, JrockRevolution.com had an opportunity to chat with Sugizo, Shinya, and Ryuichi. We talked about the present, some of the past and the near future for their World Tour: Reboot. At present, Hollywood is the second stop with the first being Germany and other dates being in Asia. You can find tour dates and information about Luna Sea right here at JrockRevolution.com. This is the first part of the interview with the final piece being published tomorrow!

We started out asking about the twenty years together and how the reunion has gone so far. Shinya answered first, saying it wasn’t like someone had said, “hey, let’s do this”. The timing happened to be good. “A lot has happened over the years,” he explained. “Things were just right for this to happen now.”

Sugizo agreed. “A certain kind of gravity brought us back together.” Like things were in alignment. Ryuichi added, “Also, the fact that we could produce an ideal sound at this point in time as a band. The feeling of wanting to play together again was also there.”

Germany happened to be the first stop in the world tour, an experience that seemed to make them all happy. “This was our first world tour as a group,” Ryuichi explained. “There was some anxiety and maybe some trepidation. But after seeing the strong reaction from fans, of course, everything changed. That was my strongest impression.” It certainly appeared to have bolstered his confidence in the remainder of the tour. Sugizo was impressed at the strength in unity fans conveyed at live. “In Germany, there were, of course, German fans. But there were also fans from all over the world. People from Russia, other parts of Europe, South America, and even from Asia; a lot of people from everywhere arrived. People waited a long time to see Luna Sea and waved their country flags for us, which was very impressive and very beautiful.”

Sugizo went on to add that no matter the song, fans danced to them all. “It was very refreshing for me to see something that’s so very different from Japan. Dark songs, songs that have a dark atmosphere or even slow songs – fans would dance. It wasn’t just songs with a rock ‘n roll edge. It was all the different varieties that they were getting into. That’s not something to see in Japan.” He further added that Germany was a great place for rock ‘n roll. Ryuichi agreed with the sentiment, calling the first show ‘very exciting’. Shinya was very happy with the reaction as well. “I felt a lot of love in the way fans expressed themselves and became involved. It was impressive – I really felt that.”

The name of the tour is “Reboot”, but is this a ‘rebooting’ of Luna Sea from where they left off? A deeper meaning in that it’s going back to the drawing board? Sugizo asked what Reboot meant to us and we said it could mean just ‘picking up’ from the point of their hiatus.

In a way, Sugizo agreed and elaborated on the title. “Ten years ago back in the day, when we stopped activities, Luna Sea was probably too big back then,” he nodded, seemingly deep in thought. “After that when everyone was doing their own work, ten years later, as we grew as musicians and people, all those changes and progress were necessary for us to come back together. So maybe ‘Reboot’ isn’t just an expression for starting the band, but it’s sort of a larger meaning. Since you can’t separate the musician from the man. Maybe it’s sort of a philosophical aspect, too.”

In their active days, Luna Sea was definitely a band that made its mark early. They became an iconic band that inspired artists then and to this day. Not many bands in Japan would not know their name. In fact, we were curious enough to ask why ‘Luna Sea’, which seemed a play on words. Or was there a deeper meaning to that, too? Every one of us seemed to look at Ryuichi for an answer and he explained the roots behind the band’s name with a little help from Sugizo, who outlined a bit of the timeline.

“‘Luna Sea’ came about because of the moon. Looking at the moon, it can look like it’s spinning and that might put you in a spell. The word ‘lunatic’ came up; ‘make you crazy’. In 1991 around our first album and before our major debut, we became ‘Luna Sea’, which had a very beautiful feel. It related to the moon and that first idea of looking at the moon and losing your mind to this more tranquil idea of a sea on the moon. Luna Sea.”

With the show tonight, we asked Ryuichi for a message for the fans looking forward to the performance.

“Thank you for waiting for so long – ten years! We’ve been looking forward to playing here in Los Angeles and we’ll put on a good show for fans!”

Luna Sea plays tonight at the Palladium Theatre in Hollywood, California, the second stop of their world tour “Reboot”. Tune in tomorrow for a review of the show, the second part of the interview and a peek at the meet and greet that took place last night!

We’re up to part two of our interview with Luna Sea, done a bit before their show at the Palladium Theatre last night. Check out the first part, watch out for our live report and update on the meet and greet on Friday! In this part, we took a look at the young Luna Sea and a flavor of the future. We continue with vocalist, Ryuichi, guitarist, Sugizo and drummer, Shinya.

As young adults, everyone has idols to look up to. We asked the three about when they were young and if they could talk to any of their inspirations. What would they have hoped to convey to those inspirations about what you were about to embark on musically? Ryuichi started off among the three in answering.

“Rather than having something concrete to say to someone I admired or adored, it’d be more like catching some feeling or ambience from them.” Our translator then asked if there was someone specific he’d have in mind. “In particular, maybe Morrie from Dead End,” Ryuichi replied. “But there just wouldn’t be something concrete I’d have to say.” Experience, it seemed, was as equally important.

Shinya expressed a regret in not seeing Led Zeppelin live. “That’s something I wished I could have done,” he said.

Both Sugizo and Shinya agreed on one thing as well. That as musicians, it’d be more meaningful to them communicating through the language of music rather than verbally. Sort of having a jam session, which would bring them closer than words would. A very profound idea and one that definitely goes beyond mere expression of a single message.

On the inverse to that, fans and artists alike have cited Luna Sea as being a major inspiration to them, be it musically, spiritually or in other ways. We asked what were some of their most memorable moments being on the opposite side of the first question and being the inspiration.

We caught ‘kouhai’ in his response, to which the translator explained, “A ‘kouhai’ is sort of like a ‘junior’ in the same profession, so in this case, another vocalist.”

“There was someone in the past,” Ryuichi said, “A ‘kouhai’ who looked up to me. But what I strive for, what I want to accomplish, is still incomplete. So we were in the same position, really, of ‘becoming’.”

Sugizo looked beyond the tangible side of inspiration. “Rather than having young artists follow what we do or copy or mimic what we’re doing, I want them to look inward. David Bowie, for example, was a glam rocker in the 70s. Rather than put on makeup [or look similarly], I took influence internally. That’s what I hope other artists would do, too. Sort of looking at ‘the essence of Sugizo’. The spiritual and philosophical aspect.”

“I was born into a tradition — Noh, which is an art that started long ago,” Shinya replied. “My family’s from this tradition. I used to play the drums. The idea, what I learned, was to never be satisfied with where you are – always strive to be more. That’s the message that I hope to send.”

With little time left before the scheduled meet and greet, we chose to take a look at the world outside of music. In the last decade, between the Internet and the developments of social networking, we were curious about the way artists are in multiple places, such as Facebook, MySpace and Twitter and how Luna Sea planned on expanding after coming back together, or if it was important to how they plan their future.

Sugizo’s reflection of their take was poignant and heartfelt. “It’s very simple. It’s about the live show. Of producing the kind of show where it gets attention. People leave thinking, ‘wow, that was a great show!’ With the success of those kinds of shows, that’s how our message has grown and will continue to grow.”

Sort of going back to basics, we asked? “Yes, exactly,” he nodded. Ryuichi concurred.

“I agree about centering around the live shows. Sugizo’s answer takes us back to previous years, to a time when people were buying vinyl records and then CDs, and now digital music. Even with these changes over the years, it’ll be the actual performances that will convey ‘Luna Sea’. Being able to reproduce our music well in lives will show that.”

One thing was more than apparent at their live show. Not only has this legendary band performed well when they were together a decade ago, but they haven’t forgotten what it takes to make an incredible show.

Our thanks to Sugizo, Ryuichi and Shinya for taking the time to give us some wonderful insight to a band we hope to see more from in the near future.