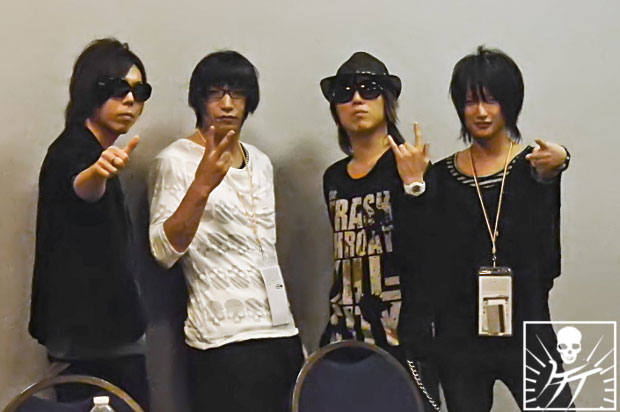 Your new album, Alpha, was just released on the 19th; What would you like to convey to the world through this album?

Nao: It’s been two years since our last album came out. We’re really happy and excited that we’re able to put out this new album. It’s a little bit different than what we have done in the past, there are a lot of new things and we hope everyone will enjoy it.

I can tell that from the PV. The PV is an interesting concept because the band is not in it like so many of their other PV’s, it has a profound image even with just the music backing it.

You first performed in the United States at AM2 in 2011. Have you experienced any changes or new thoughts about traveling overseas since then? Any learning points?

Kohsuke: Since the last time we were here, we were able to experience and encounter new things and really reflect on them. I feel that by thinking on our experiences, of traveling overseas, touring, and meeting new people; I feel as though we have gained a lot of experience from those things and that if we can go, we should go.

What was something from your first experience that surprised you the most?

Kiri:  The last time we were here, we played in Anaheim. I’m not sure if it was the convention center, or security, but when we started playing the fans rushed the stage and knocked over the barriers! The security there thought the fans were going to start a riot! They made all of the fans sit down to watch the show. So when we saw that, that kind of left an impact on us.  (all laugh)

This is true, overseas fans tend to rush the stage. (laugh)

Nao: For the 6th year anniversary concert, this is the longest any of us have ever been in a band. So we want to continue to do new things and have new challenges. The anniversary concert refreshed that feeling of wanting to keep going within us. As for the concert today, since this is our first live since releasing Alpha, unlike last time, since it’s standing room only, that alone makes us very excited!  When we heard that it was standing room only, and no seating, we immediately looked forward to it. Now that it’s here, we look forward to how that is going to make us feel so that we can give it back to you. (all agree)

During your 6th anniversary live on June 3rd of this year, there were a few bands that were reunited, such as Sics as well as Kohsuke’s SIAM SHADE cover band. Are there any plans to reunite these bands again?

Yoshihiko: Well, our guitar player quit, so it’s been years since we have gotten him on stage. So when we had this live and he got on stage with us again, he said ‘Man, that was fun! Maybe we could get on stage and do this again.’ So if the chance comes up again, maybe the 10 year anniversary show, maybe we could try it again. I would love to try it again.

Yoshihiko, there seems to be a small trend of vocalists recently having vocal problems, or vocal surgery because of injured vocal chords. What do you do to prevent this? Is there anything you would recommend to vocalists with this problem?

Yoshihiko: In the beginning, I was very serious about it. I took all kinds of medication for it, cough drops, tea, things like that. Now, I realize I shouldn’t have worried so much. I don’t know if I’m the right person to answer this question or to be the example for other vocalists. (laugh) But for me, I don’t stress out so much about it and I take things as they come.

Six years is a significant time to be together as a band. Has there ever been any conflict in the band as you grew? What are some of the things that you do now to prevent it?

Kohsuke: Our main philosophy is ‘don’t hold it inside’. We’ve been working hard, working together for such a long time, that if we keep it inside, it’s going to get heavy. As humans, that is extremely important. So if you have something to say, say it, and we’ll work it out afterwards.

Is there any special routine you have while touring? What are some of the Japan only elements such as food/restaurants that you’ve missed while here?

Kiri: Well, it might be an interesting routine… it’s just between me and Kohsuke.

Kiri: It’s a promise. We’ve done it..well..since forever. Right before we go on, the music is on, and we’re about to go on stage…

Kohsuke: I tell him to hit me in the back as hard as he can. (makes the hand motion of Kiri hitting him on the back.)(laugh) As for what I miss in Japan, American food is great, we love it, but there are moments where we miss Japanese food.

You would have to find a really good place.

Fashion is important to many bands. This year, designer h.Naoto is at AWA. What type of clothing or fashion you prefer?  What about outside the band?

Yoshihiko: (agree) We usually dress like this inside and outside of the band.

Nao: The first thing we do to make a song is make the melody first, and then the lyrics. That’s the usual order that follows, but sometimes that’s not the case. Sometimes there are special cases where everything is in my head, and I have a particular image in my head of how I want the song to be formed. Once I have the melody down though, that is when I start looking at chord progressions.

Is there anything you’re particular to not changing about yourself or your music?

Nao: Our band concept is that we are the caretakers of the song. Our job is to make the songs sound good.  We think about incorporating our instruments to fulfill that goal of being the caretakers. For us, that is one thing that will never change.

What are the three most important things to have on tour? What is the one thing you tend to forget the most, like a toothbrush or extra socks?

[They decided to only pick one thing they couldn’t go without on tour.]

Yoshihiko: The one I brought this time is for the PSP. Kurohyou 2, it’s a fighting game.

[chatter amongst band members for the one thing they forget the most.]