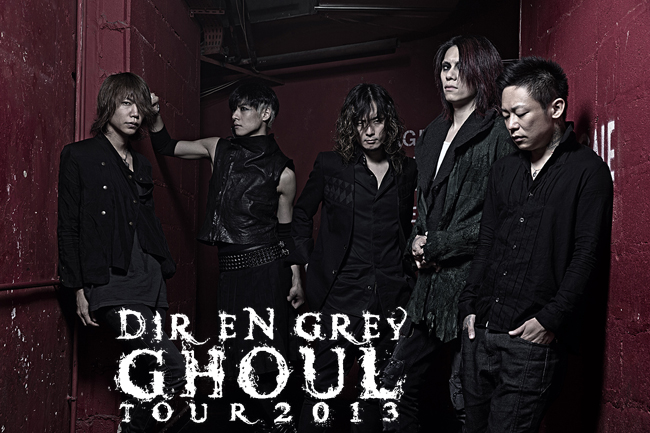 Dir en grey is a band with a unique vision. As they hit their last few stops on this year’s tour, we were able to have the honor of sitting down to have a conversation over the phone with guitarist, Die to discuss this unique vision as well as the GHOUL tour, solo projects, and their upcoming show at Budokan. As always, this is a band who delivers 200% and it was no surprise that the same effort and honesty shone through during the interview.

Dir en grey seems to be a band that does not do things without reason, from your lighting to the videos you have chosen for this live tour, everything falls into place effortlessly and is usually something we would only see at Japanese lives. Is there a particular image you had in mind when choosing the lighting or videos for your sets?

Die: Basically, on all of the different shows that we do, depending on what kind of songs, and the images behind the songs, there is always a certain message we try to put across. When it comes to presentation, such as lighting or visuals, that has a lot to do with the band manager who helps judge what is best for us, because we’re on the stage facing the audience, so we can not see what is happening on stage. So we need to have all of the staff members around us and also the manager to work together with us to help with this certain kind of production. That is the case for this tour.

Being a band with a unique world view, there are challenges I would imagine, with bringing this particular view to the world. What is Dir en grey’s particular philosophy when it comes to music?

Given that, even as your music changes through the eras, even up to present day, is there any difference in how you express that to the world in your music. Whether the music changes or the lyrics?

There is something new in your live sets that has been brought overseas that is new and unique. That would be the camera that Kyo uses on his microphone during certain songs on the tour. Are there any future plans to become even more interactive on stage such with alternative methods like this one?

Die: We definitely wanted to bring more of Dir en grey’s Japanese production over here. The only reason why it was never done before was because we never had the proper conditions on tour to allow for that production. So we were finally able to implement more and more on the stage on the production side. We hope that we have more opportunity for that, but nothing in particular in mind right now. We would like to bring a bigger production to shows in the future.

Recently, Shinya seems to have expanded his drum kit to be a fortress, likewise, Die and Kaoru have expanded to using 7-string guitars which provides the guitars with lower tuning. Are there any future plans to evolve your instruments further?

Die: I’m not saying that’s not going to happen. Of course if the opportunity arises musically in respect to instruments, but I personally feel that for me, what I would be more interested in is going back to our roots. Things have changed for us, and it’s been 16 years now playing music together. So going back to our roots might bring about a very interesting outcome for us instead of extending into something new.

As of yet, side projects have not detracted or deterred from the progression of Dir en grey as a band. Are such breaks from the band beneficial personally as well as for the band? Kyo has his photo-books, and you have also played with other bands live. Do you find inspiration in other projects that bring fresh ideas to how you contribute to the band’s development?

For your Budokan show, this will be your tour finale for ‘Dum Spiro Spero’, from your previous lives over the years up to GHOUL, the production has been bigger when it comes to stage setting and has evolved over time to become a spectacular show. It feels as if the production can only get bigger; what can we expect from Budokan?

Die: The production is a different topic, but above anything else, this concert is going to be the final point of where the band is going to come after touring in terms of Dum Spiro Spero and as you also mentioned this title is the same as the album. It’s very important for us after experiencing so much since the release of Dum Spiro Spero. Basically it’s where we will present everything that we have experienced, the good and the bad. So it’s something that I can not even express, it is a very important show for us. If you come to the show, you will be able to see something great.

Occasionally, some artists have offered international ticketing options for easier purchase for overseas fans. Is this something Dir en grey might consider doing?

Rather than rely on touring, Dir en grey has had mainstream exposure, such as the SAW VI soundtrack, being in Rock Band and also charting in the Billboard 200 twice in 2011. Besides touring and new media exposure, what other challenges in mainstream media are you looking forward to tackling? (i.e., other video games, soundtracks or mainstream opportunities)

Die: We are always open to offers if the opportunity arises, but before all of that, what is most important is concentrating on the concerts or the staging. At this time, we are finally able to bring some productions from Japan, with the visuals, and the camera you mentioned earlier, and the response has been great, but we’re trying to move that to a higher level. So I feel that that is where we need to start before we look at other opportunities outside of touring.

We’ve been to numerous shows over the years and have noticed a shift in the fanbase from primarily young women to fans of diverse backgrounds and ages. Have you noticed or been surprised by the mix of fans who have embraced your music?

Die: Every time we come over, we notice the change in the fanbase. The first time we came over, well, before we came over, we were primarily known as a visual band, so a lot of the kids were familiar with that genre of Japanese band, probably the majority of the fanbase back then. The first time we came over, we were just in jeans and t-shirts on stage, no makeup so we blended with other bands playing in America at that time. So I feel that probably the shift in fanbase happened because we were this kind of band. But it doesn’t mean that kids don’t come to the show. We know some people are more interested in the visual aspect and some are interested in the music. There is a blend of these two types of fans in the fanbase but I feel that It’s normal for people to change among the years. Sometimes you like A, sometimes you like B. But that is something that happens for everyone. I feel that we will continue to change as the fans continue to progress.

We would like to thank Die and the rest of Dir en grey as well as Nora and all staff members on their time spent on this tour, and especially taking time out for us to make it such a meaningful experience. The last, but not least thank you goes to the fans. Without you, none of this would be possible. Thank You.