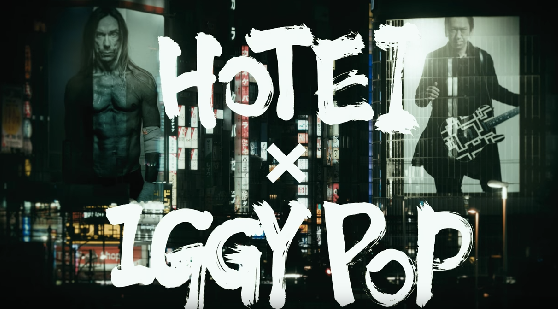 Japanese superstar HOTEI has just released the video for his new single ‘Walking Through The Night’, which features the iconic Iggy Pop on vocals.

The video follows a man’s nocturnal journey through the seedy back streets of Tokyo, lured by the bright lights of temptation. Stunningly filmed and featuring shots of Iggy Pop and footage of Hotei, the video is a gloriously evocative taste of Hotei’s homeland that chimes with the snarling lyrics.

The track is taken from the album Strangers, which was released last year through Spinefarm Records and is Hotei’s first international release. The album features an array of guests including Emigrate/Rammstein’s Richard Z. Kruspe, Bullet For My Valentine’s Matt Tuck, Noko from UK electronic band pioneers Apollo 440, and acclaimed Texan singer Shea Seger, alongside the godfather of punk, Iggy Pop.

‘Walking Through The Night’ also features long-time live fan favourite ‘Power’ as the B-Side to the release. Only recently recorded for the first time in the studio, ‘Power’ also comes with an accompanying video of him performing the song to a sold-out crowd of 10,000 people at the Yoyogi Gymnasium, Tokyo.

2016 also marks Hotei’s 35 th anniversary in music and to celebrate this milestone, Hotei has been touring Japan extensively including over 50 live dates ranging from intimate club shows, to a free open-air concert in his hometown in front of 25,000 fans and will be ending the year with his 31 st performance at the Budokan in Tokyo on December 30th, with a very special fan request show.

Not one to rest on his laurels, Hotei has been focusing on his international career and this year sold-out his first-ever LA show at the legendary Troubador, and the Highline Ballroom in New York. He also guested on Italian rock star Zucchero’s latest album and performed with him recently in Verona and at the Royal Albert Hall.