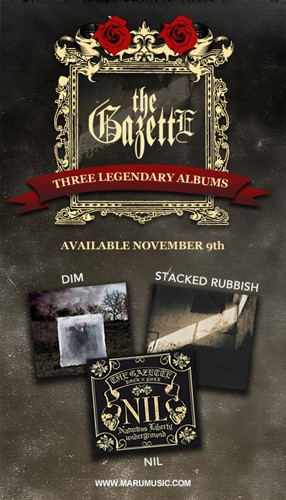 Highly Anticipated Albums from the GazettE set for Release in US

[Los Angeles, CA] – Three legendary albums from the Japanese Rock Superstars the GazettE is set for release in the US by Maru Music. The three full-length albums from the GazettE will include the popular albums NIL (Nameless Liberty Underground), Stacked Rubbish and DIM. This collection of heavy hitting albums of the GazettE’s most popular songs and their personal favorites. All of these albums are set for release on November 9, 2010 in North America.

NIL (Nameless Liberty Underground) features 15 tracks. NIL is the first major full- length album and includes their hit single Cassis. This album brought the GazettE from a struggling independent band to grab the attention of critics and visual music fans.

The sophomore album Stacked Rubbish contains 14 tracks. Originally sky-rocketing to the charts on its release in Japan, Stacked Rubbish features the chart-topping singles Hyena, Filth in the Beauty and Regret.

DIM is their most recent album from the GazettE and it contains 17 tracks. DIM is packed with multiple charting hits including Distress and Coma, Guren and Leech.

the GazettE is the most popular visual band in Japan today. Ruki on vocals, Uruha and Aoi on guitar, Reita on bass and Kai on drums make up the GazettE. Together the five members create music they like to call “GazettE Rock.” Meaning instead of making a simple rock song, the GazettE likes to experiment with the sound to make each song an original creation.

With the GazettE having a huge fanbase in Japan, the number of international fans is growing at an alarming rate. Recognizing the large number of fans overseas, the GazettE embarked on a European tour performing in Germany, France, Finland and England. It is only a matter of time before the GazettE travels to the West and perform for their fans in North America.