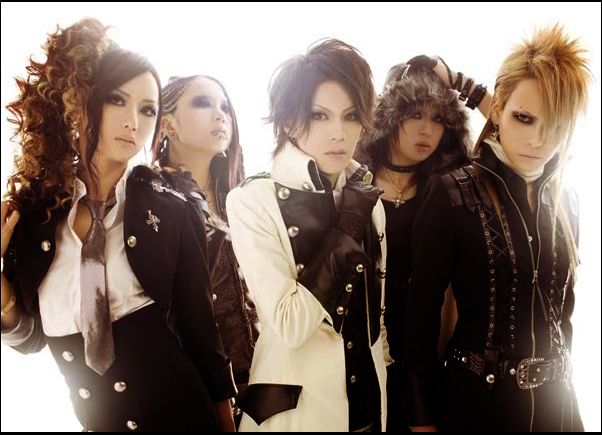 On the June 18, a friend and I went to the exist†trace show at Shibuya Boxx for the debut on their new label. While my friend is an old-school fan, I’d only ever heard their music. Having never seen them live, I didn’t know what to expect going in.

I’m pleased to say it was a great show.

exist†trace is comprised of Jyou as the vocalist, Miko and Omi on guitar, Naoto on bass, and Mally on drums.

Jyou’s voice is just as good live as it is on their CDs, and the rest of the band played really well. Omi and Miko performed backup vocals.

They didn’t just perform; they interacted with their fans. The energy from both the band and the audience could be felt in the venue. Many of the experienced fans performed gestures along with the songs, which is normal at Japanese lives.

They played their new songs, all of which were well-received by the audience and are on their new CD. If you’re an exist†trace fan, I highly recommend picking it up. You won’t be disappointed.

The member introduction was amusing. Jyou went to each band member, said their name, and asked the audience to say their name. This was repeated a few times with each member playing something on their respective instruments. Miko introduced Jyou.

Jyou, during an MC, talked about the recent tragedy in Tohoku, and how when they were at SakuraCon, they felt much support from their foreign fans and were wondering what they, as a band, they could do to help Tohoku. They brought out an American flag that had been signed by foreign fans expressing support for Tohoku, and asked the audience to do the same for the Japanese flag they had brought with them. They expressed their gratitude for the support they received from their fans, both foreign and Japanese.

During the first encore (there is normally at least one encore at shows in Japan, in my experience), Jyou came out — as a woman. She was beautiful. Her hairstyle was feminine, and the spaghetti-strap shirt she was wearing showed off some of her small tattoos. The crowd freaked out. Apparently (according to fans I asked), this was the first time any fan had seen Jyou dressed like this. They played their new song KISS IN THE DARK, which has a sort of swing feel to it. For this song, a discoball was illuminated. Naoto was wearing a kind of fedora. Jyou was reminiscent of lounge singer during this song. It was fun. Everyone danced along.

For the second encore, all the members had on the exist†trace T-shirts that they were selling at the door. Jyou had returned to her typical apparel. The encore was amazing. Afterward, they told the audience thank you and that they hoped to see them at their show on September 11 at Daikanyama Unit.

I think they have a bright future ahead of them. If you ever get a chance to see them live, I’d say go for it.