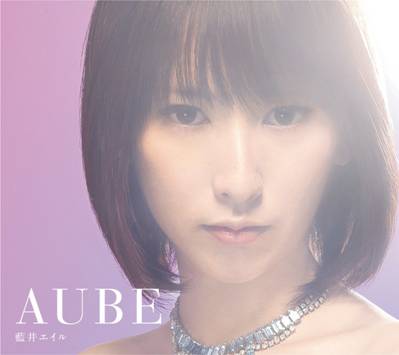 Since releasing her smash hit 1st album “BLAU”, Eir has been actively performing on various big stages, which has increased her presence in Japan and around the world.

A year later, Eir Aoi is now releasing her new album “AUBE” which fans from all around the world can enjoy!

The title “AUBE” which means ‘dawn’ in French, symbolizes Eir’s fresh new energy to start off the break of dawn.

This new album is packed with several tie-in songs including “Sirius”, “Sanbika” and “Niji no Oto” from the hit anime series “Kill la Kill” and “Sword Art Online” respectively.

“AUBE” not only showcases Eir’s singing abilities but also her increasing allure as an artist, which make this a must listen to album!

“AUBE” is now available via iTunes via the following link:

Eir Aoi has loved singing since she was a child, and at high school period, she sung in a band she had formed. After graduating from high school, she gave up her music career once but continued performing publicly.

Her impressive and beautiful voice are easily recognizable and she has been selected to sing the ending theme song for the TV-anime series “Fate/Zero”, which was released as her debut single called “MEMORIA” on October 19, 2011, achieving the #8 position on the Oricon single chart selling nearly 60,000 units.

In April 2012, Eir released an album “Prayer” which was a concept tribute album for the TV-anime “Fate/Zero”. In May this year, she had a first live event in Tokyo, where she fully unveiled her face which had been mysteriously and artfully hidden on all pictures.

In August, she performed at the up-and-coming anime song festival “ANIMELO SUMMER LIVE 2012” capturing the heart of 30,000 attendees. Following this success, she held her first solo concert in September and drew 600 audiences for the first concert, and released her 2nd Single “AURORA” – the opening theme song for TV-anime “GUNDAM AGE”.

On November 2012, her single “INNOCENCE” was released and chosen as the theme song for the TV-anime series “Sword Art Online (ALO arc)”. It became a smash hit achieving the #6 position on the Oricon single chart.

On January 2013, she released her much anticipated first album “BLAU”, which debuted #4 on the Oricon album chart. (Released internationally as well)

Currently, Eir’s Facebook page gathers more than 246,000 “likes” from all over the world, and shows how much attention she draws internationally.

Eir is certainly the anime song diva of next generation.