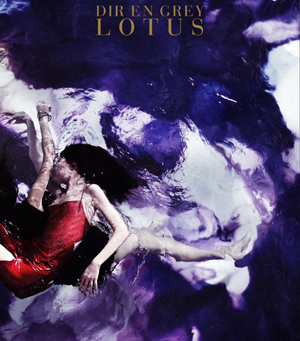 LOTUS is the second single following Dir en grey‘s 2008 album UROBOROS. It has been over a year since the release of “Hageshisa to, Kono Mune no Naka de Karamituita Shakunetsu no Yami,”and the new single LOTUS comes like a breath of fresh aid as the band takes its next evolutionary artistic steps.

While some may say that LOTUS is a lot like the previous single, I believe this is not the case. While “Hageshisa…” had a raw feeling to it, LOTUS has more of a spiritual feeling, as well as a lighter, more polished feel. The layering within the song is done to an extent not evident within earlier singles, and for that alone one should reconsider a comparison to “Hageshisa…”, perhaps instead looking at it as a coupling single. “Hageshisa…”was a heavier track, LOTUS brings that back down to a softer level, showing the diversity that the band has always maintained.

The single begins with the title track, cutting in immediately with guitar and drums, which makes it seem heavier. However, the higher guitar harmonies bring that back up, along with the bass lines that seemed forgotten in earlier singles. Those signature bass lines blend in with lower tones of the vocals, establishing a simple stage for LOTUS. The vibrant changes within the vocals set a soothing tune as soon as it hits the chorus and becomes a raw plea of disparity that has also seemed long absent from some of Dir en grey’s previous works and certainly felt missing from “Hageshisa…”.

The bass lines sparse use of toms within the drum work and those high guitar harmonies carry the vocals in a flow to the chorus, where the heavier, dark riff meets back with it to form a sense of hope that hasn’t really been touched by the band itself. While it has always been present in the lyric, within the music this may be the first time that it has been felt. The layering within LOTUS is done to a large degree over vocal tracks. A higher and lower tone are set in with the chorus, forming at the bridge something also only seen in lives: a mimic of the Inward Screams.

It is also in the chorus that we find the only screaming within the track, interwoven perfectly over higher notes that seem rather ungodly, only to fade out with the verses, returning to that soothing tone. The track ends on the words “What is believing?” This is a cry of hope, one of spirituality and lightness, not seen before by a band that has claimed it will never write a “happy song.” LOTUS is the closest the band has come to that, and it marks a new plateau towards their ever-changing sound and complex meanings.

LOTUS is followed by OBSCURE, a remake off the 2003 ‘Vulgar’ release. Dir en grey has surprised us before with remakes of classic, sometimes signature songs. With OBSCURE, the differences are subtle, yet obvious to those who are familiar with the original. Probably one of the most notorious recollection for many fans besides the song is the banned from television promotional video that followed it, directed by none other than VISUAL TRAP’s Hiroyuki Kondo, who also directed the PV for LOTUS.

What one can look back on is a solid, darkly melodic song that had a recognizable ebb and flow. On the updated version, the vocals are both sharper and smoother at the same time, more reflective of the current trend of Dir en grey. The guitars have a slightly subdued edge and the drums seem to have been pulled up a notch, focusing the direction of the song. The depth of the song is an improvement from the original, retaining the emotion and definitely make it a good song to hear live. OBSCURE follows the title track well, drawing from the slightly lighter side of LOTUS to the darker elements of Obscure.

Following these two tracks can only be something that maintains that flow and can be heard quite well in the final song. Always breathtaking, Dir en grey has managed to capture the live experience once again in the live rendition of Reiketsu Nariseba . The audio levels are on point, as are the instruments and vocals. The track highlights the high notes of the vocals, showing how much hard work is put into everything the band does, not only professionally, but also performances as well. Seeing as Dir en grey is an excellent live band, this song brings up thoughts of nostalgia, one that any fan loves to relive. As the band enters its fourteenth year, the memories will never fade. Hopefully the same will be said of LOTUS.