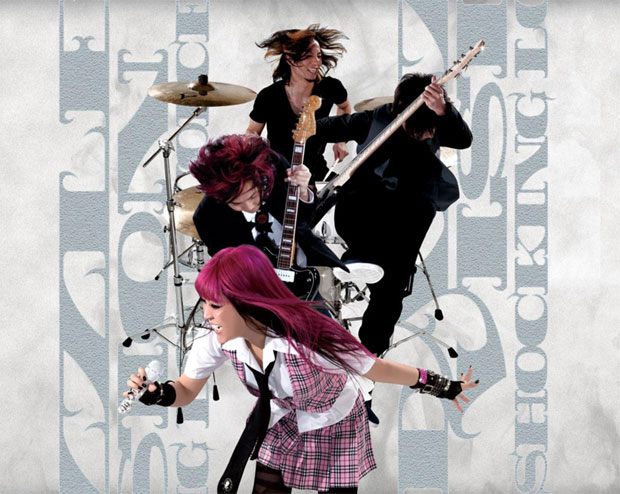 Famous for her “Death Voice,” melodic vocals, and high-fashion lolita style, singer Maiko and her band-mates made their USA debut at Sakura-Con 2010 as the opening act for HIGH and MIGHTY COLOR. Since then, DAZZLE VISION has toured in Japan with American rock band Evanescence, released two more albums, and Maiko’s voice has been added to Japanese voice databank UTAU software as the character “Maiko Hakaine”.

Event and registration information can be found at http://www.tekkoshocon.com.

Popular in the Japanese indies scene for their hard rock sound and Maiko’s alternating melodic/death-voice vocals, Dazzle Vision was formed in June 2003.

Dazzle Vision released their first album “Origin of Dazzle” in November of 2006. Their second album “Camellia Japonica” was released in April 2007, followed by an 11-city tour of Japan. After selling out of the first presses of “Origin of Dazzle” and “Camellia Japonica,” their 3rd album “Crystal Children” hit #1 on HMV’s pre-sale chart and #2 on Tower Records pre-sale chart prior to its official release in November 2008.

In February 2012, DAZZLE VISION was chosen as the opening act for American rock band Evanescence in Tokyo and Nagoya. Dazzle Vision’s new album “Shocking Loud Voice” was released May 4, 2012.

Tekkoshocon is a gathering for fans of anime, tokusatsu, Japanese music, video games, and other Japanese popular media, as well as pop culture. It is held in the United States at the David L. Lawrence Convention Center in Pittsburgh, Pennsylvania.