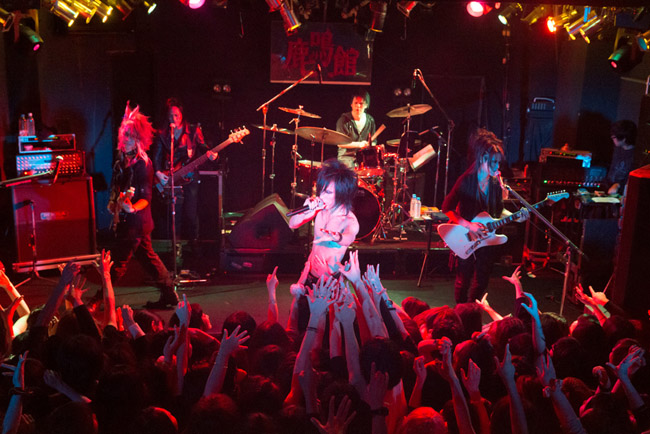 With the end of 2014 right around the corner, Creature Creature rocked out to a packed-to-capacity crowd at ROCKMAYKAN, the livehouse seen as sacred grounds by many visual-kei bands. The man who ruled center stage on such sacred ground for the past two days, was none other than MORRIE. The vocalist fronts the legendary rock band DEAD END, who is often called the “musicians’ musician”. He is recognized as a leading figure in the J-Rock scene who is well respected by many fellow musicians. Creature Creature is a solo project he started in 2005 separate from his solo activities under his name.

On Christmas, December 25th of 2014, MORRIE released his much anticipated first solo album of 20 years titled “HARD CORE REVERIE”. As a prelude to the release of the album, he toured through Nagoya, Kyoto, and Tokyo in late November. After that, he prepared for Creature Creature‘s year-end live with his regular supporting band members consisting of big names such as HIRO (La’cryma Christi), Shinobu (The LEGENDARY SIX NINE), Hitoki (Kuroyume), and Sasabuchi Hiroshi (ex. Plastic Tree).

As the title suggests, Creature Creature played two consecutive days at ROCKMAYKAN. The first day, titled “Logic of Angel”, consisted of a set of 20 rock ballad numbers. In contrast, this report will take you on an insane ride through the second day, “Devils Distance”, a set filled with heavy, hard rock numbers. Are you ready to rock?!

It was a slightly chilly night, but a large crowd of anticipating female and male fans of all ages lined up outside the venue thirty minutes prior to opening time. At opening time, about 350 fans slowly filed in according to their ticket numbers. By the time everyone was let in, it was already about 7:05pm. Ten minutes later (15 minutes later than scheduled), the house lights went down and the space was illuminated by a dark blue hue while a very dramatic and slightly eerie sounding SE started to playing in the background. The supporting members all clad in black, entered first to claps from the crowd. A minute later, the crowd cheered loudly to welcome MORRIE as he entered the stage donning a black long suit jacket with a long drape inner, slim black pants, and shiny black dress shoes.

The crowd quieted down and the band waited for the SE to finish before Shinobu started playing the clean melodic guitar intro of Shinkuu, incidentally also the first track on the album “INFERNO” (2010). MORRIE sets the atmosphere of the live with his hauntingly beautiful vocals on the short song. Following right after is the familiar transition into Cluster, the 2nd track on “INFERNO”. The song started with a grungy guitar rhythm that got everyone’s head nodding along as MORRIE sang the rock number with confident sounding vocals. The song showcased a bit from each of the instrumental parts, first with HIRO‘s roaring guitar solo which was quickly joined by Shinobu, followed by a short drum solo by Sasabuchi and Hitoki‘s funky bass line. Then it switched from a slight madness to a quiet section with clean strumming before returning to a heavier sound.

The lights brightened up for the intro of the next song, Dream Caller – yes, it’s the 3rd track on “INFERNO”! Shinobu started with swift and clean strumming on the guitar and MORRIE‘s began singing a very ‘positive’ melody…until the lights dimmed and the stage was lit bright red as the bass got real heavy and low, and the guitars took on a haunting and heavy rhythm. The crowd followed the rhythm and broke into a wave of headbangs. The contrast between the alternating dark, heavy parts and the brighter parts felt as if we were all drifting in and out of a nightmare. I’m sure I wasn’t not the only one who got goosebumps when MORRIE went from heavy vocals to falsetto and back to low notes in a flawlessly smooth sequence sung technically a cappella.

Sidetracking for a short bit, as a vocalist myself, I found myself in awe and was extremely impressed by his tone stability and absolute control in expressing different feelings through different types of singing while retaining his own style. By seeing the show live, anyone can clearly see why MORRIE is respected by other musicians – not only his vocal range and control, but also his overwhelming, and at times menacing, stage presence. His confidence, skills and charisma makes it difficult to tear our eyes away from him. This was especially evident in the next song.

Sasabuchi played a drum solo right after finishing the last song, which prompted the crowd to clap along to the rhythm and the upbeat guitar entered for Amor Fati  (surprise, it’s the 4th track on “INFERNO”). The crowd went on a wild headbanging craze  throughout most of the song. For the first time that night, MORRIE interacted with Shinobu at the front of the stage, as well as singing at the edge of the stage to interact with fans. All the members sang the harmony and looked like they were having a good time.

After a silent short break, the 5th song was surprisingly not the 5th but the 6th track on “INFERNO” – Gone By Rain. The upbeat and yet lighter song may sound a bit easier on the vocals but there are a few really high notes in the chorus that MORRIE hit perfectly with little effort. The crowd sang along whenever the phrase “Gone By Rain” came up in the song. HIRO also easily shredded through the technical solo. MORRIE‘s vibrato wrapped up the song before the signature on/off rhythmic intro of the dark, heavy, and slightly neurotic number Black Hole (they jumped back to the 5th track on the album). The crowd was in sync as everyone nodded heavily to the rhythm as the vocals went from as low as hell to as high as heaven. The guitar went from tight, heavy riffs to a melodic section, and back into madness as MORRIE growled and paced around on stage. The crowd responded with a storm of headbangs and loud cheers.

As if he was finally finished warming up, MORRIE took off his jacket before playing COSMOS BLACKNESS and Golden Game. MORRIE interacted with HIRO and Shinobu at the front of the stage and the crowd responded by putting their hands up and dancing along. HIRO showed off his tapping skills during the solo to the enthusiastic crowd. To heat things up even more, MORRIE unbuttoned his shirt and sent the crowd into a craze. I also noticed the stage staff headbanging on the side of the stage. You know a band is good when their staff, who has probably listened to these songs countless times, enjoy the songs as much as the rest of the crowd.

After a short break were two atmospheric rock ballads, Death is A Flower and Fire Burn With Me. The crowd was treated to powerful images painted by MORRIE‘s hauntingly beautiful vocals through both songs. The band then stepped on the gas pedal and accelerated into the heavy number, Psyche. With a loud cheer, the entire crowd immediately descended into madness. The unity of headbangs during the breakdown was both intense and impressive.

After 11 songs, usually this is when the MC would be but the band only took a bit of a longer break. After throwing a water bottle into the crowd, MORRIE removed his top and said, “Are you ready for more?!”  With that, Sasabuchi started the intro of the dark yet upbeat song, Rakuen e. MORRIE, Shinobu and HIRO interacted at the front of the stage as the crowd headbanged. Not giving the fans’ necks a chance to rest, the band delivered a series of heavy numbers. The crowd sang along in Red while pumping fists during the instrumentals. MORRIE was leaning into the crowd during Sexus, and those in the front didn’t miss the chance to reach out to him. Then Sasabuchi began a simple drum solo, queuing one of the live favorites, Dead Rider. Psychedelic guitars joined the song and the crowd cheered HEY! HEY! HEY! to the drum beats. MORRIE provoked the crowd by saying “Is that all you got?!”  All the members went all out during this song and was clearly enjoying the live as much as the crowd was.

For the last two songs of the main set, Swan and Aurora, the entire venue was generating so much energy and heat it was like being an oven – except nobody seemed to mind. In fact, everyone was clearly having a real blast on and off stage. MORRIE continued to drive both the crowd and the band to madness, drifting between heavy notes and light falsettos, carried by the fast and heavy guitars, and the tight rhythms of the bass and drums.

After the main set finished, the members left the stage and the crowd began the “ENCORE!” chant. After 5 minutes, the scattered “encore” chant united into one – personally thought to be one of the most beautiful moments at any live. After a minute, the band reappeared wearing black t-shirts while  MORRIE was wearing a black sleeveless long shirt. Without speaking, they played the slightly eerie but heavy Violent Rose and upbeat Paradise. The crowd went from headbanging to waving hands in the air and singing along.

After throwing another water bottle into the crowd, MORRIE finally did a short MC, “It’s not really all that hot in here…I mean, no one passed out, right? (laugh) I’m pretty warm though. (laugh)” He also announced his plans for 2015: new song release and tour. “All songs are by Shinobu!” MORRIE said, raising his hands towards Shinobu but quickly waved his hands to signal that was only a joke. He continued, “All songs will be written by HIRO!” HIRO smiled at his joke. Wrapping up the MC, MORRIE said next will be the last song, to which the crowd responded by “Ehhhhhh…!!!” but he cracked a smile and said, “Welllll, you know I kinda have to say that it is.” The band then all looked at Shinobu to start, causing the crowd to laugh. Everyone had their hands up and danced for Sen to yamiyo ni. MORRIE wrapped his hands around HIRO‘s shoulders during the solo, to which Shinobu playfully pretended to peek at them. After finishing the encore at about 9pm, the band smiled and waved to the crowd as they left the stage.

The house lights came on, which usually signals the end of a live but the crowd always seemed to know what to do – call for another encore. After only a few short minutes, the lights went down again and the band reappeared on stage for the double encore. “What should we do for encore?” MORRIE asked the crowd. Many fans excitedly yell out their favorite songs. There were a few titles being repeatedly requested, to which MORRIE responded by, “Sexus? Dead Rider? Red? Golden Game? Eh?! 4 songs?! What’s up with that, seriously! (laugh)” While they thought about which to do, he decided to have the members talk a bit.

MORRIE “Please watch over us next year as well! So, what should we play first? Dead Rider? ”
Crowd “Yes!”
MORRIE “To be honest, I like it too. Hmmm how about Sexus?”
Sasabuchi “Please play Dead Rider again!!”
MORRIE “(laugh) OK…and let’s play Red! Then let’s all go home after that. (laugh)”

With that, MORRIE provoked the crowd to headbang, chant, pump their fists in the air, and sang along to Dead Rider and Red. After the set ended, MORRIE thanked the fans while Shinobu, HIRO, and Hitoki threw picks and water bottles into the crowd, and Sasabuchi gave a deep bow. They exited the stage with huge smiles on their faces as they waved to the cheering and clapping audience. What a great way to wrap up the year!

While we wait for details of Creature Creature‘s new release and tour for 2015, you can check out MORRIE‘s solo lives: 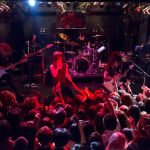 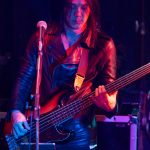 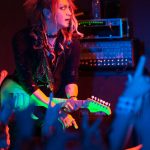 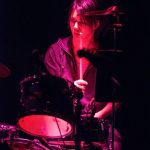 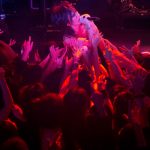 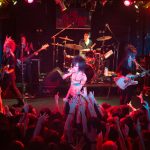 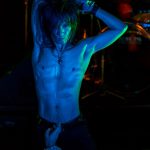 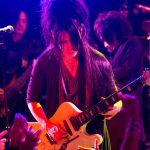