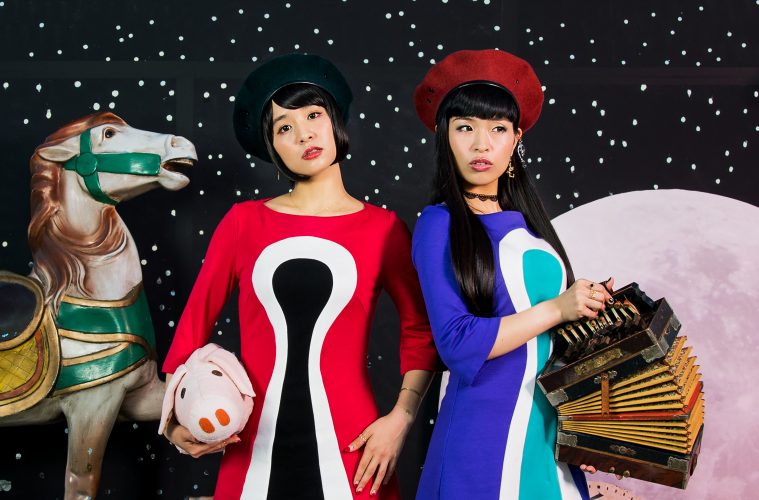 After a spectacular sold out performance in New York in 2015, Charan-Po-Rantan returns stateside again for two shows! The first will take place at the notable venue, Joe’s Pub at the Public, presented in association with Japan Society, for their solo performance on April 24.

Then later in the week, the duo will be part of the ‘Godzilla Legend – Music of Akira Ifukube’ event, which will be an evening filled with music from the Japanese cult classic ‘Godzilla!’ The event will take place on April 28 at Japan Society.

About
Charan-Po-Rantan are an “alternative chanson” sister unit comprised of Momo, 23, on vocals, and her older sister, Koharu, 28, on the accordion.

Their music is an eclectic melting pot of French chanson, gypsy music, retro 50s-60s J-pop with a pinch of Russian melancholy, all mixed together with a modern twist. Lyrics are dripped with wit and black humor, an exact opposite and surprising contrast to their colorful, eye-catching outfits (which are all designed by Koharu, and handmade by the sisters’ mother and grandmother).

Since the duo’s formation in 2009, they have performed anywhere from the street to the legendary Nippon Budokan, to gigs in Canada, Taiwan and SXSW and twice at Japan’s famed Fuji Rock Festival, even being named as one of the best acts of the festival. The pair also famously rejected a invitation from Pink Floyd’s David Gilmore to perform together (mainly out of young ignorance at the time), and are also the first Japanese artist to be followed on Twitter by the service’s founder, Jack Dorsey (for whom they serenaded at a private party for Dorsey in Tokyo).

In July 2014, Charan-Po-Rantan made a surprising major label debut from Avex Japan, and have continued to charm fans at not only their performances but also through mass media exposure on educational programs on NHK and their own radio show on a major FM station. They’ve even branched out to acting in a movie for which they also penned the soundtrack and theme song, to musically directing a theatre show for one of Japan’s most popular comedians. In October 2016, Charan-Po-Rantan made their New York debut at Japan Society. The concert was covered by major media outlets including The Wall Street Journal.

Their latest album was released in January 2017, and all eyes are on this talented duo as they continue to create their borderless “colorful poison” that draws out a world of fantasy, madness and humor through their well-rounded musical circus entertainment.