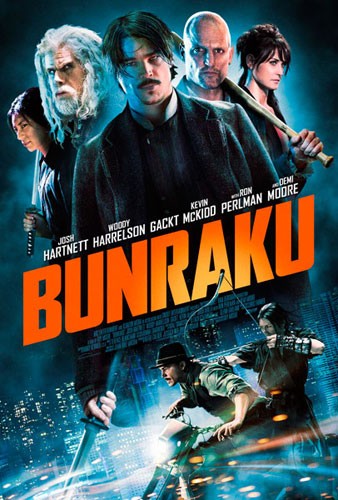 
Otakon is one of the largest fan conventions in the United States focusing on Asian popular culture – primarily anime, magna, music and cinema – which is held annually at the Baltimore Convention Center. The convention runs July 29-31. The BUNRAKU screening will take place 12:30 pm on Friday, July 29 in Video Room 5 HD.

BUNRAKU follows a mysterious drifter (Josh Hartnett) and an ardent young Japanese warrior Yoshi (Gackt), who both arrive in a town that has been terrorized by outrageous and virulent criminals. Each is obsessed with his separate mission, and guided by the wisdom of The Bartender (Woody Harrelson) at the Horseless Horseman Saloon, the two eventually join forces to bring down the corrupt and contemptuous reign of Nicola (Ron Perlman), the awesomely evil “woodcutter” and his lady Alexandra (Demi Moore), a femme fatale with a secret past. This classic tale is re-vitalized and re-imagined in an entirely fresh visual context, set in a unique world that mixes past and present, fantasy and reality, Samurai and Western all combined. Like SIN CITY and 300, it gives classic conflict a whole new graphically supercharged dynamic. Resonating through a wide range of cultures and showcasing a mind-blowing array of martial arts disciplines, BUNRAKU is a fresh arena for breathtaking fight action.

The film was produced by Snoot Entertainment’s Keith Calder and Jessica Yu with Picturesque Films’ Nava Levin and Ram Bergman.

ARC Entertainment is a “solutions based” distribution company. ARC Entertainment’s unparalleled relationships with national retailers, coupled with strong sales and marketing expertise, enables the Company to explore unique programs and business models for its content partners.

The Company develops creative and profitable retail marketing programs by connecting Intellectual Property and Content owners directly with retailers. This enables ARC Entertainment to truly align content development, investment and distribution with the requirements of retailers and their customers.

XLrator Media is a multi-platform releasing company focused on acquiring projects, including feature films, specials and libraries, and producing programming for “efficient” budgets in genres and categories that are highly under-served by the major studios and most independents. Gordon has more than 25 years of experience in high-level media/entertainment sales, marketing, production, acquisitions and executive management positions.

ABOUT OTAKON AND OTAKORP, INC.

Now entering its eighteenth year, Otakon is an annual celebration of Japanese and East Asian popular culture, and also one of the largest gatherings of fans in the United States. Otakon celebrates popular culture as a gateway to deeper understanding of Asian culture, and has grown along with the enthusiasm for anime, manga, video games, and music from the Far East. Since 1999, Otakon has been held in Baltimore, Maryland; currently, Otakon is one of Baltimore’s few large, city-wide events, drawing over 29,000 individual members for three days each year (for a paid attendance of over 80,000 turnstile attendees). Otakon is a membership based convention sponsored by Otakorp, Inc., a Pennsylvania-based, 501(c)3 educational non-profit whose mission is to promote the appreciation of Asian culture, primarily through its media and entertainment. Otakorp, Inc. is directed by an all-volunteer, unpaid staff – we are run by fans, for fans.