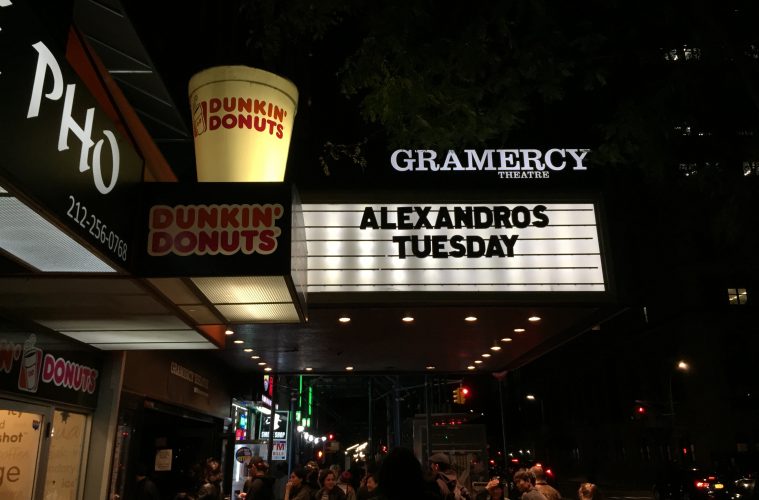 [ALEXANDROS] performed in New York City for the first time on October 23, 2018 at Gramercy Theatre to an enthusiastic crowd! Many fans traveled from not only other states, but other countries including Japan to see [ALEXANDROS] play this intimate NYC venue. Despite it being a Tuesday night, the turnout to support the band’s first U.S. tour was strong.

The crowd was eager to see [ALEXANDROS] and they did not disappoint in their passionate performance, giving their all into each song, and the crowd giving just as much back with dancing, singing along, and even hand movements to accompany each song, common to shows in Japan.

Singer Yoohei and bassist Hiroyuki had some amusing banter back and forth during their MC’s including Yoohei asking if it was Friday yet, and Hiroyuki responding that it wasn’t even close – it was only f*cking Tuesday.

The band spoke of how their recent album, released on November 21, 2018, ‘Sleeping in Brooklyn,’ was recorded completely in Brooklyn, NY. This New York City crowd cheered extra loud upon hearing this with pride for their home. “We only played two or three songs from that new album, but next time we come here, we’ll play all of them,” Yoohei declared, “So please come, we’d like to see you next year!”

During a short interlude, as Yoohei had an acoustic guitar slung across his shoulders, he abruptly started playing ‘Champagne Supernova’ by Oasis. This was an unexpected and pleasant surprise to hear, even if only a short portion of the popular song.

The set was full of both upbeat, high energy songs, and slower, acoustic, more thoughtful Japanese songs – the audience responded positively to both, enjoying everything [ALEXANDROS] had in store for their first U.S. tour.

The last song song of the night (before they left and returned for their encore) was Mosquito Bite, their latest single which is an upbeat song and a perfect way to end the evening. The guitar notes continued ringing out as the band members walked off stage and the crowd immediately began cheering for an encore. They didn’t have to wait long before the band reemerged one more time with smiles on the faces of both the crowd and band members.

To end the night, during the finale, Yoohei jumped down onto the barrier, close to the crowd. With fans reaching hands out towards him, he sang, and asked the audience to sing back to him, and they obliged. Yoohei even attempted to crowd surf, but the crowd was caught unaware and he sadly was unable to surf. He stood among the crowd, shouting the last notes of the song as he made his way back to the stage and finishing the night.

It was clear everyone had a good time, as many lined up for the meet and greet following the show. We all look forward to seeing [ALEXANDROS] again next time they tour the U.S., and if you missed them this year, don’t miss out next time they come around!