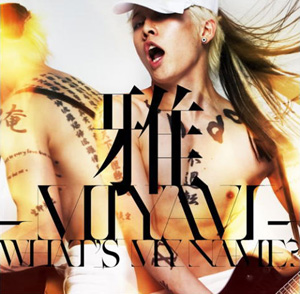 If you don’t know his name by now, you’ve been missing out; for nearly a decade, 雅-MIYAVI- has been breaking new ground in the world of Japanese rock. While the release of his 2002 solo debut album, 雅楽 (Gagaku), is colored by a marked hard rock influence, the former Due le Quartz guitarist has continued to evolve with an ever-changing style that has included blues, street funk and even hip-hop influences to produce a unique and progressive style all his own.

What’s My Name? marks 雅-MIYAVI-‘s re-debut – his first full-length original release since his break with PS Company and the birth of his own company, J-Glam Inc. in 2009. Under his own management and free to pursue any artistic avenue he chooses, the self-styled Samurai Guitarist has pulled out all the stops with his new album – or rather, none of the stops. You won’t find any smoke and mirrors in this music. You won’t even find a bassist. What’s My Name? is back to the basics – a showcase of 雅-MIYAVI-‘s unique and innovative guitar style, backed only by drummer Bobo (54-71) and keyboardist Coba84.

What’s My Name? boasts fourteen diverse tracks – most of them tested and refined on the live stage before making it to the album. Refusing to be contained by conventional labels, the Tokyo-based guitarist continues to blur genre boundaries by creating something that is, quite simply, new. “For my re-debut, I wanted to create something simple and solid that focuses on my skills as a guitarist and encourages me to progress”, he told fans on last spring’s Neo Tokyo Samurai Black domestic tour. 雅-MIYAVI- used the Taylor T-5 hollowbody electric to record the album, and the title track, “What’s My Name?”, highlights both the instrument’s easy action and the artist’s well-cultivated guitar skills with a fast-paced, slap-funk style. “Torture”, the first single release from the album, is a throwback to his hard rock roots, while the poignant and haunting “Gravity” speaks to a new depth and maturity in the artist with both its style and lyrics.

Speaking of lyrics, roughly half the album is written in English, a surefire way to both engage 雅-MIYAVI-‘s foreign fans and challenge his domestic fanbase to evolve with him. Songs like “Chillin’ Chillin’ Money Blue$” are written in 雅-MIYAVI-‘s classic, clever style, while he experiments with English poetics in songs like “Moon” and “Shelter”. “Futuristic Love” includes forays into German, Korean, and Italian as well, and speaks to 雅-MIYAVI-‘s designs on becoming an internationally accredited musician. “Suteki na Mirai” (The Beautiful Future) rounds out an otherwise mature and self-expressive album with a sweet and simple tribute to his daughter, Lovelie. “I’ve written a lot of songs lately, like Super Motherfucker Bitch, that aren’t really suitable for my daughter, and so I wanted to write something that she could relate to,” 雅-MIYAVI- told the crowds on this summer’s “Screamin’ Out From Tokyo” tour.

From the light and playful to the heavy and introspective to the simple, hard and raw, 雅-MIYAVI-‘s What’s My Name? has a little something for everyone – at least, for everyone who likes some good guitar – and chances are that, once you’ve listened to it, you’ll never forget the answer to that question.